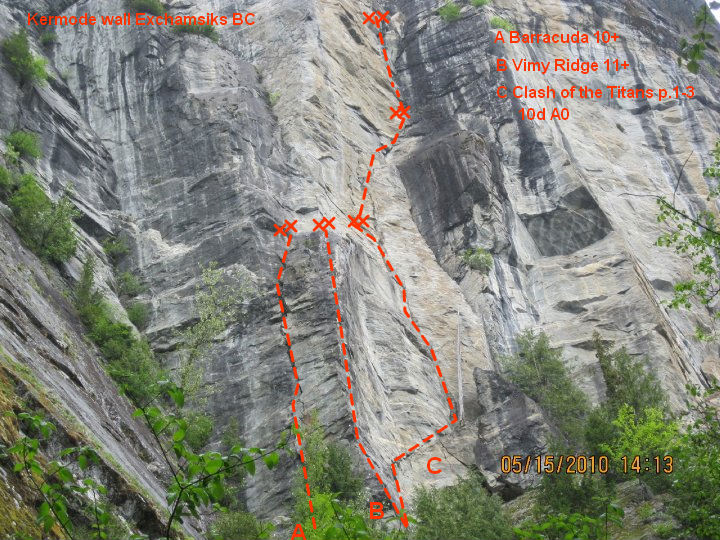 85 km East of Prince Rupert, pull off and park in the long pullout next to the tracks. This is just past the sport wall. The large Granite face is obvious above. The trail starts next to the rock fall road sign that has a little rock climber on it.. There should be some flagging that gets you up to the bottom of the gully before the fixed lines. Make sure you bring something to connect yourself to the fixed lines as it is some pretty stiff 4/5 class vegi climbing. 2- 60m ropes are needed to rap off the routes. More details pending.
Kermode Wall - Video Overview

A Barracuda: 50m should read 10-, bolted off width - Watch for some loose rocks as this is still a newr route.
B Vimy Ridge: 50m. A nice finger crack leads to a bolted arete
C Clash of the Titans: mixed. 5 pitches completed. The second pitch follows a beautiful slightly over hanging flake system that is all gear. Here is a link to John seconding it. 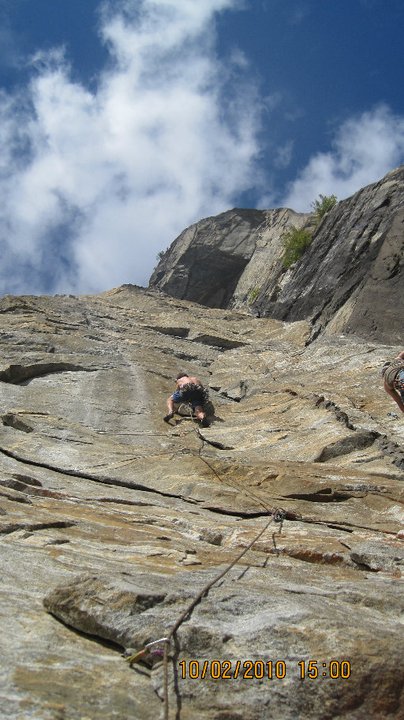 2nd pitch of Clash of the Titans - Beautiful.

Drive 1.1 km west of the Exchamsiks River bridge and park in large pull off below rock bluffs with avalanche barriers. You will see a overhanging wall approximately 100 meters from where you park. Scramble up to the base via a old climbing rope attached to a two bolt belay at the base of the base of the routes. MAP 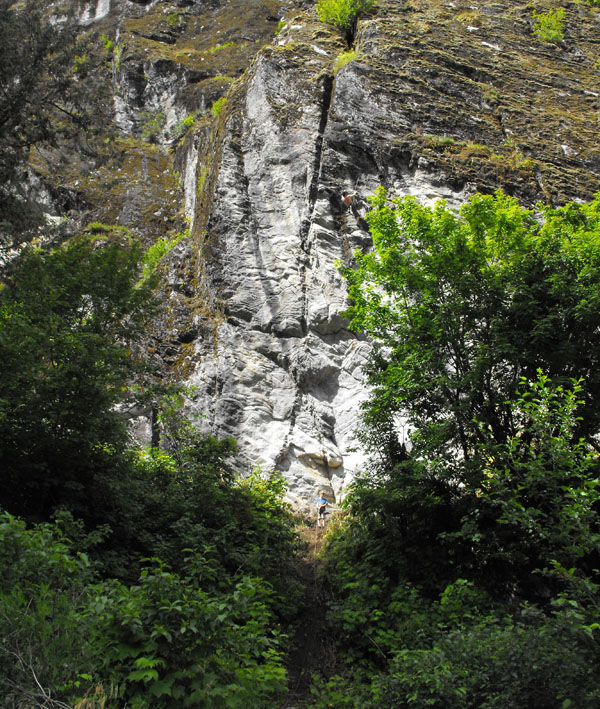 Wall can be seen from the highway. Parking is available right below the wall and is about a minute climb up. This area offers some of the best steep climbing in the North West. Stays dry and climbable through the winter/wet season though watch for ice fall coming off from above in winter.
Papa Smurf 5.10a (left yellow line, left picture) - Climb is located to the left of Kiss Me Where It Smells Funny. 5 bolts to an anchor.
Kiss Me Where It Smells Funny 5.12a (red line, left and center picture) - follow the bolts up the black dike through steep terrain, sweet line excellent test of your stamina, when you rap off this best your a good distance away from the wall, also excellent for those raining days when you just want to get pumped!!

*New Route - Gargamel 5.11a - 13m (right yellow line, left and center pictures)- Climb the line to the right of "Kiss me" and finish at the confluence of "Kiss me" and "Smurfette" at a new station. Four bolts.

Smurffette Gets Pumped 5.10c - (right picture) Climb steep handrail up and left after four bolts follow juggy traverse past greasy horn, keep traversing up and right past two bolts to an anchor. * Three new bolts have been added to the right and up to new rap rings making it perhaps closer to 5.11 - 9 bolts total* There is different finish to this one if after the 7th bolt, I think, you just go straight up the face to anchors 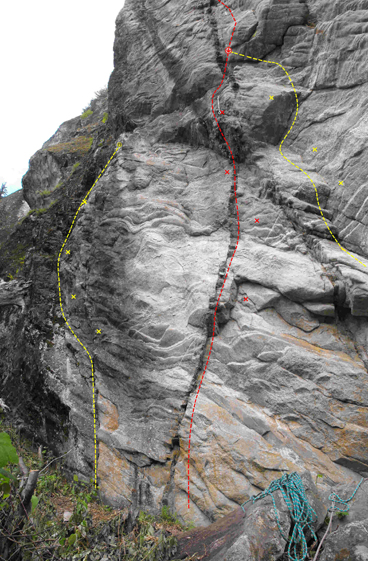 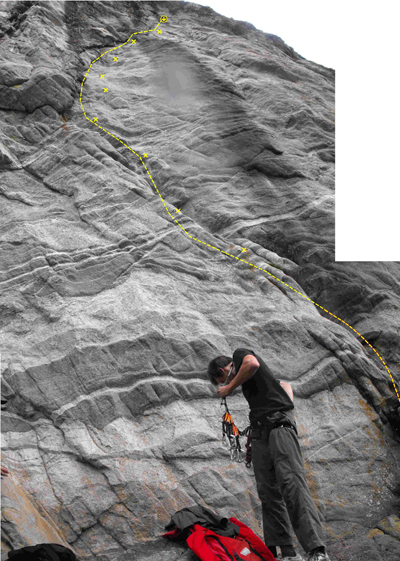 Location: Driving from Terrace drive past the Exchamsiks River. Park on a pull out just past the concrete blocks on the side of the road. Walk east toward Exchamsiks Provincial Park. The route climbs the most clean piece of rock on this portion of the face. A large x created by natraul quartz viens marks the start of the route. Note the climb was originally put up from ground up so Run outs do exist (some may be reduced by climbing with a small rack too supplement bolts). 12 Quickdraws and 2 60m ropes.

Pitch #1 40 meters 5.8 The first pitch is characterized by a large X made of quartz. The first overhang is loose however after surmounting the overhang the rock is impeccable. The nature of this pitch is edges, pockets and a section of smearing.

Pitch #2 20 meters 5.9 This pitch is short due to the nature of the pitch. You climb through rolling terrain. Cruxes are encountered where the route steepens.

Pitch #3 35 meters 5.8 Climb up and left of the belay. Climb further up and eventually follow a traverse of bolts right. Pockets, smearing and edging.

Pitch #4 25 meters 5.9 Climb up corner past two bolts. Then trend right past four more bolts to a hanging belay. Rap the route Have fun and Climb Safe. (Note its possible to rap directly down from the bottom of pitch five in two more sixty meter rappels. Pitch 4 requires some small rack to climb.

Salvus Dome
(This is stolen from Andy Lecuyer - updated May 2019)
Location: Driving from Terrace drive past the Exchamsiks River. One or two kilometers later, park beside a large spruce tree stump on the north side of the highway. You will be on an old road with a yellow gate across it (lot 5841). If you walk back across the railway tracks you will see the Salvus Dome. The Salvus Dome is a large shoulder of light gray granite. Two prominent vegetated chimneys scale the wall for 150 to 200 meters. After scoping out the route follow the road curing to the right toward the dome, ending in a Rock Quarry, where you will again see the destination. From here, walk along stockpile of boulders towards the wall. Turn right and follow PINK ribbon through a short open section (watch for stinging nettle - bring gloves, long clothes and machete in peak nettle months). The PINK trail follows up the steep old growth forest with pleasant, open sections. When the open forest cliffs-out above you, traverse climbers left over to the gully. Cross here and head uphill again for a short section, before more leftward traversing leads you to the base of the wall. The estimated elevation gain to the base is approximately 200 meters and an hour of hiking.
Approximate GPS location of Start (+/-50 m) UTM 9U 478285 m E 6020221 m N
Alternate approach - not flagged or recommended: After walking up the flagged approach you will arrive at a creek bed. Climb up the open slopes (flagged) on the west side of the creek. Eventually you will trend up toward the heavily wooded steep forest. Once in the forest you will climb up the steep trail staying relatively close to the edge of the forest. After climbing up the slope for some way traverse west gaining very little elevation. Then climb up again below the granite wall. The estimated elevation gain to the base is approximately 200 meters and an hour of hiking. } 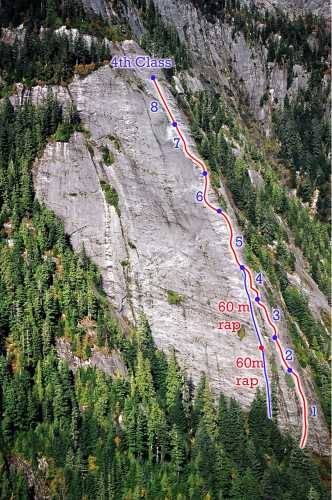 Moon Raker 5.10-, 8p
Note: The climb was originally put up from the ground-up, props guys. Run-outs have since been greatly reduced after the route was retro-bolted.
TWO 60 m ropes needed to rappel.

The Shaft 5.10-, 8p
Note: The climb was originally put up from the ground up so run-outs do exist. The shaft requires a standard rack. Pins may be useful. The original first ascent of this wall was completed in the summer of 2003. The first ascent party was at first turned off by the vegetated wall but soon recognized it held some of the cleanest climbing in the area. The original ascent party lacked the use of a power drill so they naturally went up one of the largest weaknesses they could find and they called it “The Shaft”.

P1: 50m, 5.6
The first pitch is a long pitch up the chimney just left of the route Moon Raker. Climb up the vegetated chimney, climbing on the outside when possible. Belay under spruce tree in chimney of branches.
P2: 20m, 5.7R
Climb the overhanging spruce tree up and to the right. Eventually after exhaustion and pain belay on the tree above the congested chimney.
P3: 50m, 5.7R
Climb up chimney above and once again climb through another overhanging spruce tree. Belay on top.
P4: 25m, 5.7
From the top of the last pitch, traverse across a weakness on some interesting lunar features of granite. Belay in large clean chimney which now hosts a two bolt belay on top of Moon Raker pitch 4.
P5: 60m, 5.10-
Originally no bolts existed on this pitch except for a few pins. Now the pitch hosts bolts and excellent climbing. Climb up a chimney, eventually following the bolts. Face climb out of the chimney out left and eventually follow bolts out to the right. Then follow the shallow corner crack up. At about 50m trend right to a belay on the left side of the vegetated chimney.
P6: 55m, 5.7
Climb up and left of belay following bolts. Eventually trend right up to a belay beside the forest on climber’s right.
P7: 40m, 5.8
Climb up and left of belay following bolts. More smearing and edges take you up to the base of the steep wall.

Descent: Rap the route. It is possible to rap directly down from the bottom of pitch five in two more sixty meter rappels.